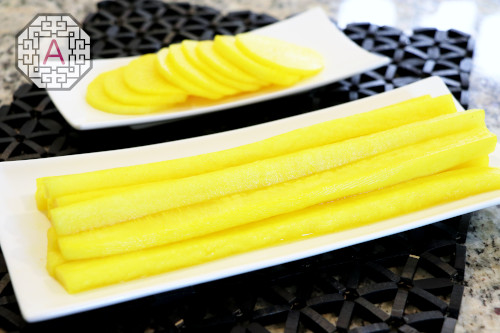 Hi! Is everyone having a good summer? Like other mothers, I’m very busy during my kids’ fun summer vacation. Anyway, I hope everyone has a healthy and enjoyable summer. Today I would like to introduce a recipe that many people will be delighted with. It is pickled radish, which is a necessary ingredient for kimbap. In it’s name, “단” means “sweetened” and “무지” means pickled radish. So, as the name implies, this radish is sweet, sour, and savory like pickles. This makes Kimbap more delicious with other ingredients. I tried to make this two different ways. One is using saffron and the other is using turmeric to color it. It was my goal to make a healthy and delicious version that does not contain chemicals, and I finally achieved that goal. So I am very happy to share this recipe.

Prepare a daikon radish (about 1½ lb). I could not find a straight radish, but if you can, pick the straightest one that you can find. That will make it easier to cut the radish into long strips. 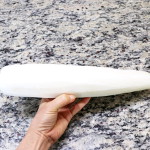 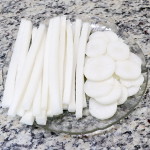 Slice the leftover radish into thin round shapes. That shape is used when making the side dish to eat with jajangmyeon (black bean paste noodles). Place the radish pieces in a large square glass container. 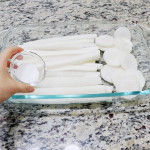 Sprinkle 2 tsp of salt on top of the radish and mix it. 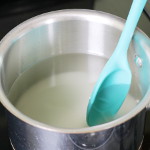 Now I will make the broth to pickle the radish. Pour 3 cups of water into a pot. Then add 1¼ cup sugar, 6 Tbsp Korean apple vinegar, and ½ Tbsp salt. Stir it until all the sugar has melted. 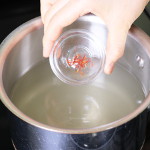 After the sugar has melted, add ½ teaspoon of Saffron. Saffron thought to be healthy, but it does not have a strong taste or aroma. When Saffron is used for cooking, it gives a pretty yellow color to the food. So it can be used as a natural pigment. The problem is, as you can see, this small amount of saffron is almost $3, which is expensive. I highly recommend saffron. However, if saffron is difficult to obtain or is too expensive, you can replace it with yellow food coloring – or you can just skip adding it for a colorless radish. 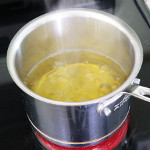 Once it starts to boil, cook it for about 10 minutes on high. Can you see the pretty yellow color? 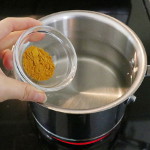 Another option is to make it with turmeric. Turmeric is the main ingredient of curry a lot of research has shown that it has many health benefits. It is much cheaper than saffron. The color of turmeric gives a much darker yellow color than the saffron, although it is a little brownish. Turmeric has a unique strong flavor and taste, but isn’t that noticeable when eating it in kimbap. 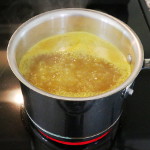 All the ingredients except turmeric are the same as the saffron radish, so after the sugar is melted, add 1 tsp of turmeric. When the water begins to boil, boil it for 10 minutes. 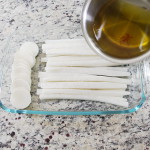 After 10 minutes, turn off the stove and immediately pour the boiling water over the salted radish. 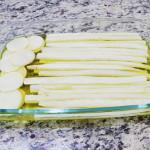 This is for the saffron pickled radish. 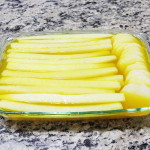 This is for the turmeric pickled radish. 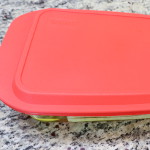 Let it cool and then cover it. Refrigerate it for about a week.

Occasionally turn over the radish pieces so that they color evenly. It’s four days later. It seems to be pickled and nicely colored. When I ate it just by itself, I thought the turmeric version would not be good for Kimbab because of the strong flavor of the turmeric. After I made kimbap with it, surprisingly, the strong taste was hidden by the other ingredients. It was much more delicious than I thought it would be. The saffron radish was also very surprising because it was almost the same color and taste as the yellow pickled radish that you buy in the store. It was so delicious that I felt great. The conclusion is that my number one choice is the saffron version, but I recommend the turmeric version too. Some kimbap lovers, like me, hesitate to eat it because of the cancer-causing artificial sweeter found in most danmuji. Some people cannot easily buy any as well. This homemade danmuji can be the best solution. 🙂 I hope you try it someday and share your experience with us. Thanks.